The day the bills came due

November 11, 2022 by Joseph
This post is by Joseph from West Coast Stat Views (on Observational Epidemiology and more)
This is Joseph.
Over the years, I have followed how Mark follows the hype that many industries engage in, with ideas like the Ponzi threshold where over-valued companies end up making aggressive decisions to try and catch up with their value.
Consider the case of Sam Bankman-Fried (multi-billionaire at 30) and his new thread:

The comment "FTX US users are fine" looks very scary to put out in the midst of a liquidity crisis and reports of founder bankruptcy. Would you really want to have investors make decisions based on this disclosure in the midst of a rapidly changing market situation? It's also challenging when tweets only 2 days ago were assuring people that everything is fine. 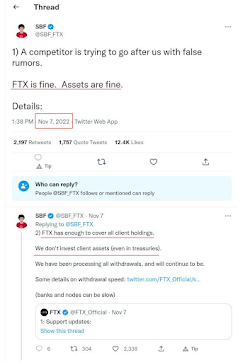 Still, real people are going to be hurt:

The teachers will be fine but it is warning about how unregulated banking can play havoc with people's assets and retirement funds. There is a reason that regulations exist, and it is neither that the government hates bankers becoming rich (all evidence is to the contrary) or that they want control (Libertarians to the contrary). But that the blow back in a major crash is very painful.

That said, there is an issue with crytocurrency having no underlying assets and the general issue of there being a reason that there are banking regulations. So let us consider an overvalued company, because of a very high acquisition cost.
It is not the best sign in the world that the CISO (Read more...)
%d bloggers like this: