Siri for Seniors: Ruminations on the HomePod mini

March 12, 2021 by hypermark
This post is by hypermark from The Network Garden - Mark Sigal's Blog 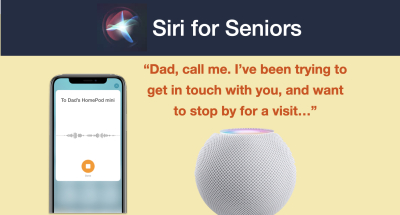 My dad lives in assisted living. He’s got his wits about him, which is great, but his mobility is very limited, which is not so great.

While he has an iPhone and an iMac, he an absolute beginner on the iPhone, and if he answers the phone or a FaceTime request 25% of the time, it’s a good day.

Recently, I got him a HomePod mini, thinking Siri is about as far as I can get him to go in embracing technology to get out of his sandbox.

The first time I demonstrated to him the fact that the device was mostly voice-controlled, with pretty much the entire of universe of music available for the literal asking, he got a big goofy grin.

Even though trained as an engineer, the directness and instant gratification of Siri and HomePod were like a thought bomb erupting in his brain.

Once he figured out HomePod mini basics, it became my fancy to check on him throughout the day through the Home app on my iPhone.

In a click, I could see if he was enjoying the HomePod and listening to music.

Interestingly, even though his HomePod was in a different physical location than my home network — hundreds of miles away, in fact — because it was part of my “My Home” device network, I could connect with the HomePod from anywhere.

Which brings me to Intercom. I had first tested out Apple’s Intercom function, which allows you to push a (Read more...)