I was in New York last week, for what was essentially a blink of an eye. The reason for my visit — a dinner hosted by our firm, True Ventures, for a growing number of portfolio companies in the city that will always remain the center of my universe. It was amazing to see 60-odd people at the event, all mingling with each other, sharing their stories and outlining their ambitions and challenges.

We don’t have an office in New York, but True now has about a dozen companies that are based in the city. These include names such as Teachers Pay Teachers, Peloton, littleBits, Namely, Splice and Triple Lift; just a few of the fast-growing companies from New York.

Our dinner gathering was an apt reflection of New York’s growing presence in the global technology landscape. According to data collected by research firm 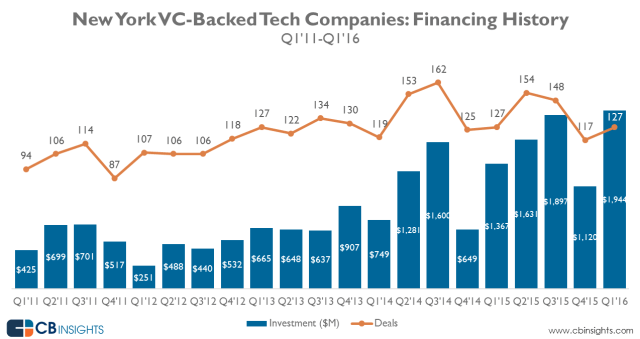 Insights, the New York region pulled in about $1.94 billion in venture funding during the first three months of 2016 — second only to Silicon Valley, and the highest in any quarter during past five years.

The New York Times, in an article today pointed out that while there have been many startups hits from New York, there is yet to be a successful company out of New York that is as big as Google or Facebook or even Salesforce.

I would argue that New York’s biggest success is Kickstarter – that has created a brand new way of creating and measuring demand, enabling creativity and shown the way for a new economic model. It might not be as large in terms of revenues or shareholder value, but when it comes to creating human capital, Kickstarter stands side by side with the giants on the Mount Olympus of technology.

Still, I understand the need for such big gargantuan companies — after all, they provide great marketing for a region and investors, and can provide a lot of economic boost. However, I feel that any region needs to think not in terms of size of their hits, but the impact of the ecosystem. A thriving startup ecosystem should provide economic growth and employment. They should not be measured by their relative size, but by their impact on the region, its founders and its community at large.

I am more excited about the growing diversity of New York’s startup ecosystem. Name a sector and you have a startup represented in New York. After spending an evening with the creators of change from True family, I know they will be the ones who will keep New York on the map for a long time to come.

The post In NY, Let a Thousands of Startups bloom appeared first on Om Malik.