Yesterday was Opening Night at Wrigley Field.  Being the long suffering Cubs fan that I am, I went.  You might have heard they are rebuilding Wrigley.  Currently, they’re rebuilding the bleachers, all the street infrastructure and they put in a new LED video board. 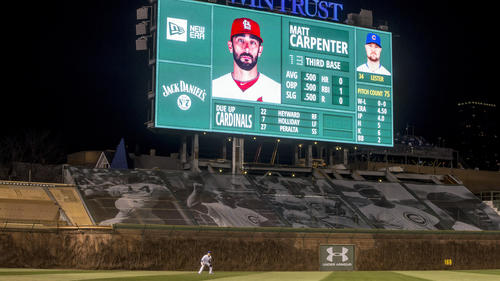 They still use the manual scoreboard. It’s still the fastest ball/strike counter in the world. After Jon Lester got the first ground out, I realized that was the first time I had ever seen a replay at Wrigley Field.  I have been going to Cub games since 1969.  Last night, there was only one game on it.  You don’t see that very often.  The next time will be when the Cubs are in the World Series.

The bleachers should be pretty sweet when they get them done.  To me it looked like you could still see the ballpark from the centerfield roof decks, the left field decks and you could certainly see it from the right field ones.  Kapow Events will book one for you.

I tried to Meerkat and Periscope some of what was going on, but there just wasn’t enough cell phone bandwidth.  If I were ATT ($ATT) or Verizon $VZ, I’d cut a deal with the Cubs today.  I’d run a lot more bandwidth through the ball park so that people on their cell phones could upload video, photos, snapchats and all the other things people do now at games.  Now is the time to do it since the ballpark is being redone, bit by bit.

Purists might not like that big video board and some of the other things they are doing to rebuild the park.  But, that’s a part of baseball now.  So are cell phones.  Most stadiums I have been in don’t have near the bandwidth they need to support cell service.  It’s not about talking on the phone.  It’s about the messaging and photo/video stream.   For owners, it’s free marketing.

I can’t imagine what the video board will be like for concerts. That should be pretty cool and make the experience better.  The sound system in the park was clearly upgraded.

They are making a lot of other changes to the ballpark that will take time.  The bathroom situation at Wrigley has always been tough.  The club houses for both teams are not major league quality.  All those things will change in coming years.

It was as good a night as we get in Chicago last night. The temp was decent and the wind wasn’t heavy.  The Cubs didn’t play very well last night.  They are young, but we still have hope.