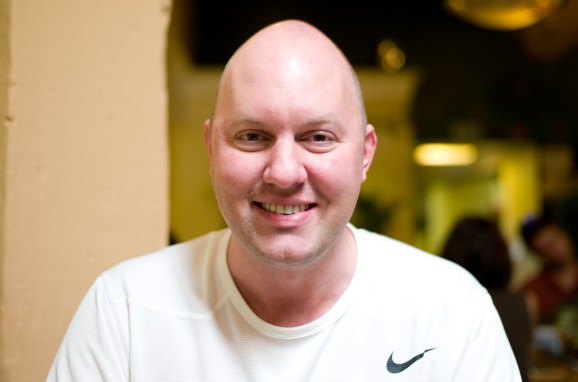 Marc Andreessen is kind of a big deal. As the co-author of Mosaic, the first widely used browser, one might say Marc is the inventor of the Web browser as we know it.

Marc is also well known as one of, if not the, leading venture capital investors along with partner Ben Horowitz. Landing an investment from Andreessen Horowitz, Marc and Ben’s firm is a dream come true for every startup across the globe; the firm’s companies include Twitter, Skype, Zynga, Groupon, Foursquare, Pinterest, and a little company called Facebook.

I kind of set myself a goal several years ago to try to learn from the greats.

decided I would start conducting interviews with people, mostly in tech, who inspire me.

Over the years, I have interviewed, whether by email, Skype, Hangouts, or in person, people like Guy Kawasaki, Walt Mossberg, and (one of my most recent ones and an interview that took me years to land) Steve Wozniak himself. You can see all of the interviews I have done here.

Anyway, Marc was at the top of my list, but for a very long time, it was something I may have wanted to achieve but had absolutely no way of accessing him.

Then he started tweeting — a lot!

I followed him closely for months and engaged with Marc on many occasions about different topics, both because his tweets are consistently interesting and eye-opening and because, well, I wanted to get on his radar and hopefully one day interview him.

Then one day, I got that email: Marc Andreessen was following me.

This was new to me, but why not? And so the interview, my very first public Twitter interview began. You can see the first question and the entire thread here or below.

Well, the man sure lived up to his name, and I don’t know about you, but I sure learned a lot. Thanks, Marc. And as for your final answer, I am looking forward to grabbing a falafel with you when you open Andreessen Horowitz HQ in Israel!

Hillel Fuld is CMO of Zula, a startup advisor in Israel, and an accelerator mentor at Google Launchpad, Microsoft Ventures, and others throughout “Startup Nation.” More about Hillel here.